The Six, by K. B. Hoyle, is a YA fantasy adventure story about 13-year-old Darcy Pennington, who is stuck with her family at Cedar Cove Family Camp – the very last place she wants to spend her summer. To make matters worse, she’ll have to spend time with awkward and annoying acquaintances and try to make new friends, no small order for an introvert. But little does Darcy know that the camp sits on the brink of a portal to another world, and that portal – that gateway – is about to change her life forever. 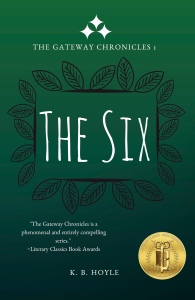 Darcy feels like no one understands her, and she never feels like she belongs. On top of that, Darcy is 13. Being an introvert is hard enough, but being a teenaged introvert, who needs time alone but doesn’t always know how to communicate her need, makes for complicated friendships.

I was an extrovert at 13. I wouldn’t have understood Darcy then – I wanted to be around people every waking moment. In the past 22 years, though, I’ve slowly discovered that strong introverted tendencies were hiding under my boy-crazy, party-all-the-time teenaged attitude, and I found myself connecting strongly with Darcy. K. B. Hoyle has constructed a character that is not only relatable to a reader more than twice her age, but one that also helps this borderline extrovert better understand the true introverts in my life.

Darcy’s struggle shows up on the first page of The Six, when her younger brother won’t leave her alone to brood on their long car ride to Cedar Cove, and continues as they reach the camp and settle in, reconnecting with old friends and attempting to make new ones. Her longing to be understood competes with her desire to be alone on her own terms, and within 24 hours Darcy has alienated the friends she had just made. Darcy’s poor handling of this situation nearly scuttles something much more important than having a fun week at family camp: the fulfillment of a prophecy in the kingdom of Alitheia.

Darcy doesn’t tumble headlong into this magical realm without warning. As she tries to be nice to Samantha Palm and gets to know the rest of Sam’s friends at Cedar Cove, she receives hints that something out of the ordinary is happening, but she writes these off as wishful thinking. I enjoyed the chase that Hoyle leads her readers on: we know it’s a fantasy novel, so at some point magic will show up, but it’s fun to try to figure out which tidbits actually mean something and which are leaving a false trail.

My favorite of these moments early in the book is a conversation between Sam and Amelia, one of the Sam’s Cedar Cove friends, about a girl who disappeared at the camp 50 years earlier. Of course, I began to wonder at the significance of this detail, but when Amelia casually dismissed Sam’s thoughtful comments about the “magic” of the camp, I thought I might be wrong. To my delight, this reference was in fact a nice bit of foreshadowing amid the girls’ otherwise-mundane camp tour.

Once Darcy and her friends make it into Alitheia, the story is well-balanced between world-building and plot development. New creatures and characters are introduced briskly, but we still have time to get to know them before more appear. The dynamics among the titular “Six” (Darcy, Sam, Amelia, and three boys named Dean, Perry, and Lewis) are also given space to grow. The strongest feature of the story, however, is that Darcy’s introversion and her drive to be understood continue to be integral to the plot, adding to the danger of all those belonging to “the Rebellion,” not to mention causing serious conflict with her friends.

Hoyle’s magical world is rich and multi-layered. The readers learn about Alitheia along with The Six, which suggests that we will discover more details with each subsequent installment. Alitheia contains animals of extraordinary intelligence, humans, spirit-like creatures of darkness, and, my favorite, narks. These elf-ish beings have one consciousness and personality during the day and a completely separate consciousness at night. As you might expect, for the teenagers from Cedar Cove – Darcy especially – this takes some getting used to!

All of these factors – the character development, the magical world, the rising danger – add up to a story that is not only highly enjoyable but also makes you think. I finished the book in one day; I don’t remember the last time I’ve gotten so immersed in a work of fiction. I haven’t even mentioned the delicious awkwardness of middle-school crushes, Darcy’s horse companion, or the brilliant connections between the geography of Cedar Cove and that of Alitheia. And there’s a thread in the epilogue that reminded me of the scene at the end of Season One of Stranger Things, when Will coughs up the slug-thing from the Upside Down. No slugs here, but the hint that all is not quite well increased my craving to read the next book. Fortunately, The Six is Book One of 6 in The Gateway Chronicles, and the whole series will be coming this summer! I can’t wait to go back to Alitheia with Darcy and her friends.

The Six is available here on Amazon. Read it out loud with your family, give it to your kids, or keep it to yourself and stay up late to finish it, like I did. Once you’re done, I’d love to hear your thoughts, because the only thing better about discovering a new favorite book is talking to other people about it!

View all posts by Sarah Cozart